In 1970 I was promoted Technical Officer(TO) and moved to work at the parcel sorting office at West Street, Leeds ( now demolished ). This was a large, all mechanised parcel distribution centre. The parcels arrived at one end and via a mechanised hydraulic conveyor system operated by a post man pressing the correct button the parcel would find its way very quickly compared to the old method into a mailbag and on to a delivery lorry on its way to the recipients home.

I was in charge of a shift engineering team which looked after the conveyor system’s electrical and mechanical components. Oliver Morey (T2A), Albert Appleyard (T2B) and myself (TO) were the team.

I was to leave the parcel office after a couple of years to be the TO in charge of the electrical / mechanics of the main sorting office in City Square, Leeds.

In 1973 I left the GPO to take the position of Chief Engineer at Almonds Bakery, Gain Lane, Thornbury, Bradford.

On leaving the GPO which had now become separate to telephone division I was asked what I wanted to do with the money in my superannuated account. The Government of the time had started a scheme that enabled you to put money into an account which would in time give you an extra pension on top of the standard pension you received at aged 65. You paid about 7% of your annual salary into the account. Well there was about £170 ( quite a lot of money in those days) in the account. I decided to leave the money frozen in the account – the reason why I can’t fully recall. However, what an astute decision it has turned out. I started drawing the pension in 2008 and it is now worth some £3,000 per year.

From Almonds my engineering career took me to Watmoughs of Idle, Bradford, Telegraph and Argus newspaper, Hall Ings, Bradford then Pickerings Lifts of Stockton on Tees working out of their Leeds office. Gregson and Bell, Hall Lane, Bradford. Finally as an Engineer Surveyor for Municipal Mutual Insurance later to become Zurich Municipal who I left in late 1997. My electrical career had served me well.

As you will see elsewhere along the way I sampled married life three times.Patricia in 1966 who helped me produce two daughters Deborah and Gaynor. I thought we had an idyllic marraige. Unfortunatelly Pat in 1983 fell out of love with me just before my 40th birthday. I was heartbroken. Deborah and Gaynor devastated. We divorced in 1983. Because of the way I am I hold no acrimony. We are friends. I often call at her house in Baildon where I am warmly welcomed by Pat and her husband John always serves me a refreshing G n T.

I joined a dating agency, Countrywide Introductions run from Brighouse. In those days conducted by post. I went on lots of dates. Some good but mostly bad. I met and fell in love with divorcee Sylvia Coral Musgrave,

40 yo, of 20, Castle Avenue, Rastrick. Rachel and Lindsay were her charming daughters by her marraige to David Musgrave which had ended in 1980. We married on her 41st birthday 8th December 1983. Our marraige was idyllic. Sylvia died suddenly from a brain aneurysm on 10th September 1984. My world once again had collapsed.

I fell in love again with Christine who I married on 16th August 1985. We are still in love. See Marraige

In May 1998 Christine and I become the landlord and landlady of a public house in Hove Edge, Brighouse the Dusty Miller.

In 2002 I was made an offer I could not refuse and sold the lease of the Dusty. See Dusty

2002. We moved into 189, Thornhill Road, Rastrick, Brighouse bought for £55,000. We are still here. I did odd part-time jobs. A chauffeur and assistant kitchen-fitter with Jim Stewart who I had met at the Dusty Miller. In 2011 I ceased all work. Christine worked as a sales assistant at Sainsburys, Brighouse for 13 happy years. 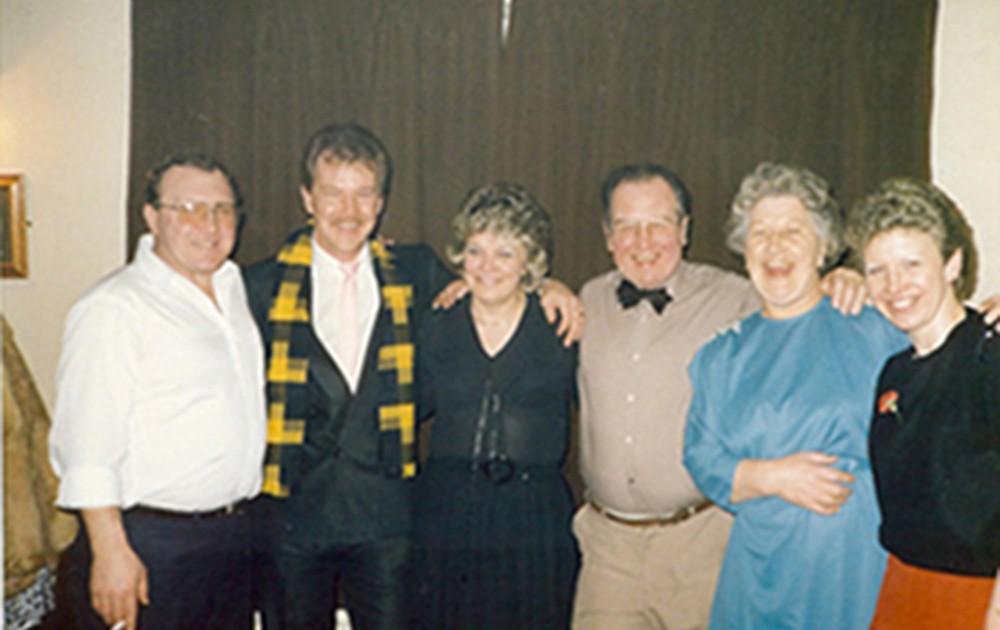 While at Almonds I met a fellow engineer called Geoff Foster who lived at Thornbury. Geoff introduced me to his dad Les and mum Win who were landlords of the Thornbury Tavern in Leeds Road, Bradford. Geoff had an elder sister Lyn (my girlfriend for a short while), a younger sister Ann and younger brother Bryn. I was to remain friends and in touch with Geoff until his untimely death in 2011 at the age of 63. Sadly his sister Lynne died just eleven weeks after his death.